Watching your chest rise and fall

Your arm curled around the pillow

The sound of your breath as it escapes your lips

Three months ago I would have moved in closer

Three months ago I had no doubt you loved me

This morning, as dawn breaks, I memorize each and every part of you

Knowing this will all come to an end

Today I went to my second session in this round of therapy. I find that the days I think, I have nothing to talk about, or, I feel OK today, end up being the hardest sessions. Today’s appointment was no exception. There were lots of tears and seven hours later I still feel so exhausted.

My eyes hurt. Every part of me feels achy and I don’t think I can attribute it to this morning’s workout. I’m tired. I have no appetite.

My previous experience was about learning about myself, opening up old wounds, and finding my coping mechanisms. This experience is about perspective. Both will be equally important. Both will save my life. 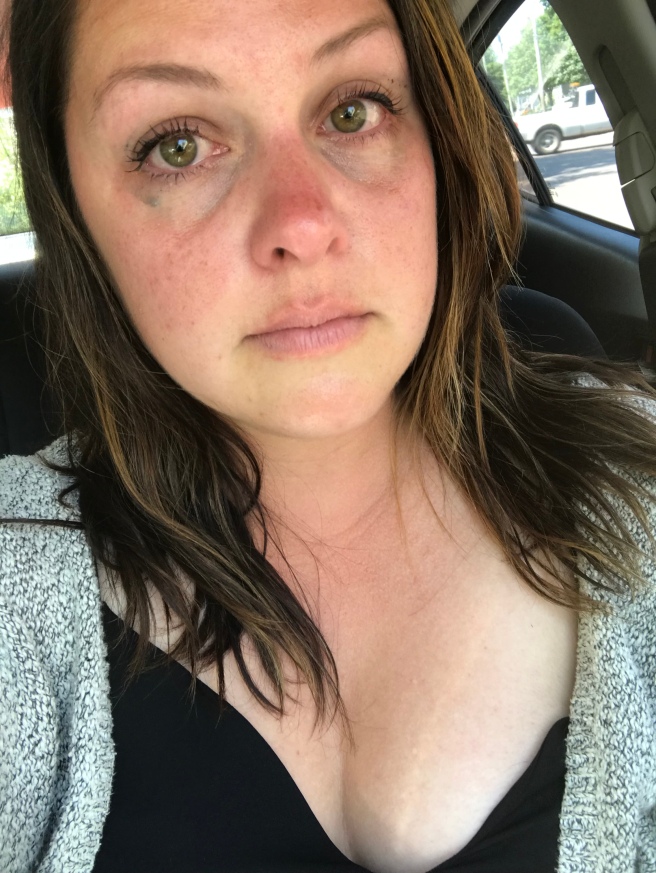 Earlier this week I (as my doctor has previously referred to it as) “gathered the tools.” I walked around our house trying to decide if this would be the place where I do it. I’m not so sure. I sat on the floor, tools in hand, and decided it’s not the time. Not yet.

I feel as if, in October, I opened a door I can never close. Coming to close to a suicide attempt has fueled an inner monologue I didn’t realized existed within me.

“Well, I could just kill myself right now.”

The amount of times this thought crosses my brain when I’m feeling sad or struggling is staggering. I’d say “scary” but, honestly, the idea is no longer scary – it’s desirable.

What is the truth?

The difficult part is when I make a post on social media and share these feelings, I start to accuse myself of seeking attention, and then the comments or messages I receive also make me uncomfortable. Part of me hates that I need someone to tell me that I matter and the other part of me doesn’t believe them anyways.

I’m still in this fight but mental health is kicking my ass.

In November my partner and I were extremely close to buying a house. It had been a long, difficult year and it felt like things were starting to come together. We looked at a lot of homes and nothing felt right. A discussion with both of our parents led us to decide to increase our price range and so we had lined up a half dozen beautiful homes to look at on a Monday evening. Both of us agree that night we likely would have found “the One” and by the end of the week placed an offer on our first home together. And then, that morning, word went out that the company he worked for would be closing down in a year.

Needless to say, we canceled the showings.

For six months we’ve been in limbo while my partner tried to find a new job while trying to balance the extreme amount of hours he currently works and I’ve been holding off on any long-term plans not knowing what our future holds.

Well, our future is starting to take shape and in two weeks I’ll be moving my partner out to Prince Edward Island where I’ll join him another four weeks after that.

Last summer we took a trip to the east coast and enjoyed the island, but we’re not naive. We know that visiting a place is not the same as living in a place. While he has secured a job I will be starting the application process and leaving a job I’ve really enjoyed for the past three years. I’m in the middle of trying to search for housing based solely upon photos and phone conversations. We have to start packing up our stuff. We have to figure out how we’re going to logistically make this move.

But I feel eerily calm and confident.

Big things are happening – so big that I had to defer my Around the Bay option to 2020. A few friends and family know but until certain things are finalized I’m keeping my secret close.

I feel like I’m falling apart. Last week the whole week was a write-off. I managed to do something to my upper body on my left side (yes, somehow it’s always the left!) and spent all week trying to feel better through stretching, foam rolling, lying on a lacrosse ball, applying heat, and finally getting a massage on  Thursday. It was still sore when I woke up Friday morning so I applied heat at my desk and sat with a lacrosse ball behind my shoulder blade one more time, rested over the weekend, and it seemed to do the trick.

By mid-week I feel like my mental health had taken a hit. I don’t know if it was because I was hormonal, in pain, or I missed working out, but I felt very cranky and agitated. It’s interesting how things that seem so small can have such a big impact on your health and wellness.

I feel like I read more e-books this month than usual because there were so many titles on my TBR (aka, “To Be Read”) list that went on sale for under $5 if I bought the Kindle version. I also find that it’s so much easier to carry my Kindle with me everywhere. Aside from reading on the cardio machines at the gym, I read while in the waiting room of both my doctor and my therapist, in line waiting for my take-out order, and while waiting for my car to get an oil change. It’s easier to throw the thin device in my purse and (because my purse is usually full of junk) I don’t have to worry about destroying the cover or pages of a physical book.

Kindle
The Last Days of the Romanovs – Helen Rappaport
In the last year or so I’ve become increasingly interested in the Romanov family so I finally decided to dive into something other than Wikipedia. I felt like the writing was very balanced and tried to avoid any sort of bias or romanticizing of the family. There are two more books about the Romanovs by Rappaport that I’d like to follow-up with.
PS Reading Prompt: Book about a family

Almost Missed You – Jessica Strawser
I really feel conflicted about this read. I enjoyed the first half of the book despite being able to figure out the twists before they were revealed, but I felt like the story kind of fell apart in the second half. It was an easy read and I didn’t hate it… but I’ve read a lot of pretty good books recently so it was just sort of… flat. I bought it on sale for $2.99 but I don’t think I would suggest someone paying more than that.
PS Reading Prompt: Book told from multiple characters POV

Kitty Genovese: A True Account of a Public Murder and Its Private Consequences – Catherine Pelonero
As someone who is fascinated by true crime I had learned of the murder of Kitty Genovese years ago but aside from knowing she was a woman whose murder had been witnessed by many neighbours, almost none of which called the police, I didn’t know any details. This book was very in-depth, learning about Kitty’s life, her murderer’s life, what neighbours witnessed on the night of the attack, and more. I felt like the author was very thoughtful in placing such an emphasis on Kitty and her life rather than just her death and the person who took it from her. I highly recommend it for anyone interested in true crime.

Her Last Word – Mary Burton *****
I bought this one in 2018 after I first received my Kindle because it was only $1.99 and after 30 pages I created a “Did Not Finish” shelf on Goodreads and quit. I don’t need to know about the female detective’s “chiseled frame,” the “tall, slim,” death investigator, or a victim that “arched her full breasts (side note: as a woman I’m not sure it’s possible to arch my breasts?) as the water glided over her nipples.” No, thank you.

Before I Go To Sleep – SJ Watson
I’ve had this one on my To-Be-Read list for years. While scrolling through the Kindle store I noticed it was on sale for $1.99 so I jumped on it. I was actually surprised how much I enjoyed this book. I had theories along the way but the author kept me guessing the entire time. It was a fairly easy read and I’m interested to see how the movie compares.
PS Reading Prompt: A debut novel

We Were Mothers – Katie Sise
It was alright but it felt like a rip-off of Big Little Lies. There were almost too many characters that I didn’t care enough about. Every time a new chapter started from a new perspective I had to remind myself who everyone was and what their relation was to the other characters. By the end I was annoyed with everyone.
PS Reading Prompt: A book with no chapters, unusual chapter headings, or unconventionally numbered chapters.

Becoming – Michelle Obama
This was a beautiful memoir. I liked that such a big part was focused on her life, her education, and her career. I also loved her honesty when talking about her hesitance regarding her husband’s political career, her struggles as a mother, wife, and career-woman, and all the lessons she has learned along the way.
PS Reading Prompt: Book recommended by a celebrity you admire (Oprah’s book list and Obama’s Best-Of 2018)

Little Fires Everywhere – Celeste Ng
Beautiful seems to be my favourite adjective because that’s how I also want to describe this book. I think Ng did such a good job of telling this story because it made me remember how complicated life can feel as a teenager. I had seen some people describe this novel as slow-starting but I think that’s essential to the story. You’re provided with an in-depth introduction to the characters, understanding their motivations, and this made it very complicated for me to “choose sides” as I truly felt for each character in the story.
PS Reading Prompt: Book you meant to read in 2018. (I had this on my shelf for months as I didn’t do much reading last year)